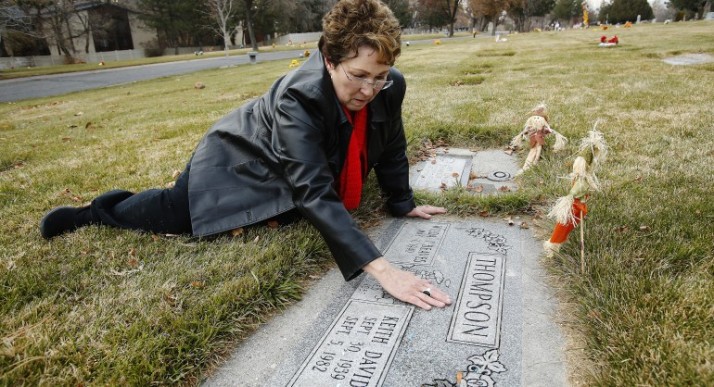 You won’t believe this woman’s heartache.

Today’s blog is a little different. It comes with an invitation to change the story.

I don’t know why some people have to face as much pain as they do. Wilda Thompson is one of those people–a woman whose suffering seems unimaginable.

Wilda’s pain started early in life when her kid brother died in a plane crash. It was a foreshadowing of what was to come. In her early forties, Wilda’s husband died of brain cancer, leaving her a widow with six children to raise by herself. The loss of a spouse is always difficult, but this was only the beginning of Wilda’s afflictions. The cancer Wilda’s husband died from came from a genetic mutation called LFS. Those with the gene have a nearly 90% chance of dying from cancer. Sadly, five of Wilda’s six children inherited the gene. Since her husband’s passing, Wilda has lost four of her six children and a fifth is currently fighting cancer.

To lose a child is one of the most difficult things a parent can suffer. The pain of losing more than one is nearly incomprehensible. But, unbelievably, for Wilda, it gets worse. If you are a grandparent, you will keenly understand this. Ten of Wilda’s fourteen grandchildren inherited the gene. Five of them have already died of cancer.

Particularly heartbreaking is that not all of Wilda’s deceased loved ones have died from the gene. One of her grandchildren, a five-year-old granddaughter, made national news in 1998 when she was found dead with four other little girls who had accidentally locked themselves in the trunk of a car. Another one of Wilda’s children and grandchildren drowned when a sudden storm hit the lake they were fishing on. For three days Wilda sat on the shore while the police dragged the lake for her son’s and grandson’s bodies. I don’t know how she has survived this.

As I learned of Wilda’s suffering a friend of mine came up with an idea that will not only help Wilda, but will help thousands of children as well. An experiment in communal charity.

There was a time not so long ago that when someone’s barn burned down, the community came together to rebuild it. This is the beauty and power of community. Those days may be gone, but I believe people still have that heart. One of Wilda’s children’s last words were, “Please find a home for mom.” Ever since Wilda became a widow, she has lived, with her children, in whatever housing she could afford, bouncing from apartment to apartment. Wilda is no slacker. She has worked tirelessly to provide for her family her whole life. (Except for the times that she’s had to care for a dying child.)  Raising a family as a single mother is always difficult, but add massive medical bills to the equation, and, well,  you get the picture.

This is how we can help. A generous, anonymous donor has put money down on an inexpensive condo we would like to purchase for Wilda to live in for the rest of her life. (She’s currently 72) Upon her death, the condo will be sold and the proceeds will go to pay off the Christmas Box House, a home for abused children. Since its inception the Christmas Box House has housed and aided more than 75,000 abused children. If everyone who reads this blog makes a small donation, just $2, we can not only help a widow now, but we will help abused children for decades to come. (Of course you can donate more.)

The Bible tells us that pure religion is to comfort the widow and the fatherless. This is precisely what I am inviting you to join us in doing. To not only make a small donation, but to share this link with others. If you can’t afford a donation, and some can’t, then please share this link. That too is a donation. We can’t bring Wilda’s loved ones back. We can’t even save her grandchildrens’ lives. But we can make a difference in her life–and then the lives of thousands of abused children to come.

I have looked intensely into this story and know it to be true. (Recently the Deseret News, ran a two-part story on Wilda. The above photograph is courtesy of Deseret News.) I know there are many in our world who need help. And maybe our community can’t help everyone, but that’s no excuse not to help someone. Thank you for your consideration. Thank you for sharing. To make a donation just click here. Or mail a check to the Wilda Thompson Charitable Account, America First Credit Union, P.O. Box 9199, Ogden, Utah, 84409-0199. 100% will go to pay for the home. If there is any extra money raised, it will go to help abused and neglected children. Blessings. And thank you for helping. I will keep you updated on our progress.

Richard Paul Evans is the #1 New York Times and USA Today bestselling author of The Christmas Box and the Michael Vey series. He is the author of more than 25 bestselling books. 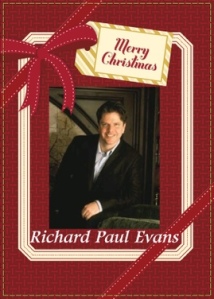 There are times in life when we just need a feel good story, one that will make the holiday stress fade away and bring back the real meaning of Christmas cheer.  I want to introduce you to my favorite author whom I just found about a year ago.  Walking through the library last year, I saw a book nestled in with the other holiday books.  I brought it home, read it cover to cover, in one night being so involved with the story that I didn’t care that I had things to do the next day.  Frankly, I was hooked on Richard Paul Evans!  I flew back to the library the next day and found every book I could by him and read them all cover to cover with happy abandon!

Now that the holiday stress is upon us, you may feel a need for a bit of calm, a bit of quiet and a bit of love in this crazy world!  I have the answer for you ~ Richard Paul Evans’ books!  You can find them in your local library (if someone hasn’t beat you to it) or you can order them on Amazon and get them in 2 days!  You won’t go wrong with any of his books, but I just bought and read in 2 days (b/c I am a full-time Mom, wife and I do have to bring in the bacon with my SendOutCards business) his latest because I buy them on Amazon to give away when I see someone who needs a little pick me up!  You can too!  Just click on the books to order if you wish!

This is my latest read…and I plan on passing it along to my Mom so that she has something special to read at night during the holidays since this is our first holiday season without my Dad. I’m also planning on buying

for Mom and a few friends as Christmas gifts this year. His books are perfect for plane/car rides, before bed relaxing moments and for those times when you just need a little extra holiday cheer and love.

I even read his books for teenagers and now my son is reading the Michael Vey series as well. If you have a teenager in your life, this is a great pick as well.

which will be under our tree this year (for my son and for me to read since I have yet to read the 2nd book in the series).

And if you’re not about Christmas, there’s the Walk Series which again, I read in no time because his books are quick and easy to read, but highly enjoyable!

And the next book coming in 2013 hasn’t a cover yet, but you can pre-order here! A Step of Faith (Walk Series)

For me, I need a bit of extra caring this holiday season ~ for some it is a sad time, a time to remember those who have passed and to never forget that we are blessed with the PRESENT of PRESENCE in the here and now!  So if you’re looking for something special, think about curling up with a good book that will feel like an old friend telling you a heartfelt story that will make you happy that you are here!

I copied his autobiography from Amazon in case you want to know more about the author!

When Richard Paul Evans wrote the #1 best-seller, The Christmas Box, he never intended on becoming an internationally known author.  Officially, he was an advertising executive, an award-winning clay animator for the American and Japanese markets, candidate for state legislature and most importantly, husband and father. The Christmas Box was written as an expression of love for his (then) two daughters. Though he often told them how much he loved them, he wanted to express his love in a way that would be timeless. In 1993, Evans reproduced 20 copies of the final story and gave them to his closest relatives and friends as Christmas presents. In the month following, those 20 copies were passed around more than 160 times, and soon word spread so widely that bookstores began calling his home with orders for it.

His quiet story of parental love and the true meaning of Christmas made history when it became simultaneously the #1 hardcover and paperback book in the nation. Since then, more than eight million copies of The Christmas Box have been printed. The Emmy award-winning CBS television movie based on The Christmas Box starred Maureen O’Hara and Richard Thomas. Two more of Evans’s books were produced by Hallmark and starred such well-known actors as James Earl Jones, Vanessa Redgrave, Naomi Watts, Mary McDonough and Academy award winner Ellen Burstyn. He has since written 10 consecutive New York Times bestsellers and is one of the few authors in history to have hit both the fiction and non-fiction bestseller lists. He has won three awards for his children’s books including the 1998 American Mothers book award and two first place Storytelling World awards. Evans’s latest book, The 5 Lessons a Millionaire Taught Me About Life and Wealth, is now available.

Of his success, Evans says: “The material achievements of The Christmas Box will never convey its true success, the lives it has changed, the families brought closer together, the mothers and fathers who suddenly understand the pricelessness of their children’s fleeting childhood. I share the message of this book with you in hopes that in some way, you might be, as I was, enlightened.”

During the Spring of 1997, Evans founded The Christmas Box House International, an organization devoted to building shelters and providing services for abused and neglected children. Such shelters are operational in Moab, Vernal, Ogden and Salt Lake City, Utah and Lucre, Peru. To date, more than 16,000 children have been housed in Christmas Box House facilities.