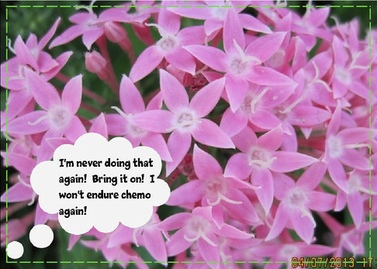 I’m never doing that again!  Bring it on!  I won’t endure chemo again!

I remember saying the above to my MIL (Mother-in-Law) one day after returning home from another brutal ACT chemo treatment.  Bald, nauseous, tired and achy, I told her and anyone else who dared to listen to me that day that I was only doing this once (meaning the chemo regime) and God/Doctors/Cancer better bring it on because I wouldn’t be doing this again.  I would give my whole heart/soul/strength into fighting and enduring the chemo now, but that I was never doing it again because I was sick and tired of being sick and tired!

Years later, my MIL has recounted this story to me saying that in her head, she clearly remembers thinking, “Oh yes you will if you have to ~ I’ll make sure of it.”

It’s funny that I’ve been writing so much about breast cancer these days.  I don’t mean to be giving you a barrage of Pink Posts, but I guess it’s on my mind and these Daily Prompts just make it so easy to explain how I felt.  I think that with illness or tragedy, we just numbly go through the paces in order to try to reach the other side of the dark tunnel.    We soldier on as it is, baby step by baby step until we feel like we can’t do any more and that’s when the “I’m never doing this again,” foot stomping, tear-induced demands, written in stone in our minds are said.  We will endure this now, but we aren’t doing it again.  At least that’s how it was for me.

And I’ve been blessed (Oh my, did I just say BLESSED?  Yup, and I meant it!) to not have had to endure chemo again, although I’ve been dragged through a multitude of surgeries and complications since 2002 when I had my 6 months of chemotherapy.

So I guess for the point of the Daily Prompt, chemotherapy and all the accoutrements that envelope the protocol that specialists prescribe fits today’s ‘tried a new experience and thought to yourself, “I’m never doing that again!”  Don’t you think so?

Be Healthy ~ Be happy

Enjoy the Presents of Presence!

Have you ever gone to a new place or tried a new experience and thought to yourself, “I’m never doing that again!” Tell us about it.