To surrender is to allow the Universe to have a hand in life.  Surrender isn’t a negative as many of us deem it when we hear the word.  Surrender is simply presence during whatever chaos surrounds us.  It’s not picking up the karma of chaos, but simply allowing it to swirl around us while we stay peaceful, centered and present.

And if that sounds hard to do, well, by golly, you’re right!  (Sorry, I needed a giggle to break the seriousness.)  Because many times it’s not easy, otherwise we’d all be doing it and be like Eckhart Tolle or the Dalai Lama without straining to stay present.

Surrender isn’t giving up or giving in or allowing others to control you.  It isn’t being a doormat or losing the battle.

Surrender is breathing in the gratitude for what we currently have at this very moment and acknowledging it.  Surrender is faith in integrity.  Faith in ourselves.  Faith in the Universe that all arrives with Divine Timing.  Surrender is letting go and letting God.  Surrender is putting the desired outcome out there and taking the baby steps that we can in order to accomplish whatever it is we want without putting restrictions, nor past or future limitations on ourselves and our situation.  It’s stillness and prayer.  It’s a loosely built plan of what we’d like ultimately, but with the caveat that somewhere close in that vicinity would be fine as well.  It’s allowing the Law of Attraction, the angels that are friends and strangers or maybe, actually angels, to help us.  It’s continuing to do our best daily, with integrity and lay our worries on the bedpost as we sleep in peaceful slumber, knowing we have done our best today and have earned a restful sleep.  Surrender is  allowing the freedom of peace to envelope our souls.  To find the peace in the current situation, no matter how bleak it seems and to remember that tomorrow is another day with a new dawn and the possibilities of miracles abound.  It’s reaching out to others when times get tough, for more often than not, they are waiting in the wings to comfort, to help and to encourage.

It’s finding The Presents of Presence, unwrapping the peace and being grateful for what is in this very moment.  It’s finding the good now.

Have you every surrendered?  What was the outcome? 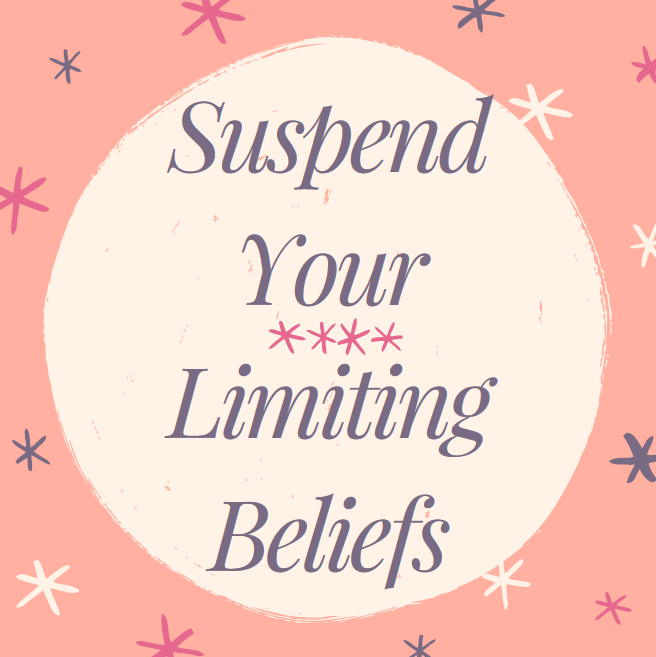 Have you ever had a moment where you catch yourself thinking, “I can’t do that” or “That can’t happen because….” or the dreaded, “They don’t understand the complexity of the situation, that’s impossible!” or anything else along those lines?

I have encountered many facets of those limiting beliefs in my lifetime as I think many of us have.  We forget, in the chaotic moment of fear, that there are limitless possibilities to any situation and the outcome does not have to only be what we project or believe could happen.  No matter how convinced we are that we know how the experience will end or how the person will react or what will happen, the fact remains that we don’t know for certain.  So many factors come into play in any given situation and it is our job to suspend our limiting beliefs to welcome the infinite possibilities that life provides.

We have a choice in every situation.  We can choose hope or despair, limited beliefs or allowing God and the Universe to tap into a new experience.  It is in making the conscious choice to choose hope and allow, that provides power to the situation, to the life lesson and to the mending of relationships.  It is not that you are powerless though.  It is that you are, in affect, joining forces with the Universe and God to learn and to grow with your new life lessons.

Failure is a dreaded word, but in not having a situation come out as we want it to, we often declare it a failure.  However, failure is not necessarily what it is.  Sometimes, failure is simply a way of opening a door to something new that had one succeeded the way we believed, we would not have been afforded this opportunity!  There are life lessons all around us to be learned and many doors of opportunity remain locked when we do not change our limiting beliefs that ‘it must be this way‘ in order for our lives to be deemed successful or good in our eyes.

Time and again, I found myself knocking on a closed door of what I thought was failure, forgetting as the adage states, “when one door closes, another opens” or “when God closes a door, he opens a window.”  Spiritually, I am letting go of my preconceived notions of success and failure and thus allowing infinite possibilities to flow without restriction.  I’m suspending my limiting beliefs!

It’s a process as you can imagine and a change in outdated thinking that feels a bit uncomfortable as I stretch the limits of my own mind.  But happily, I can report, it is helping me to gain perspective on all sorts of situations that I had once declared in my head, failures.  With newfound thoughts, I see how much better my life is as I have eased into uncharted territories that I would have never had the courage to enter if I stayed small in my thinking.  There’s a bliss to be had in this life!  Let’s go and enjoy it!

There’s no agony like bearing an untold story inside you.

I think we blog because we all have a story inside of us.  Some of us have quite a few stories within us ~ inspirational moments that turned failure into triumph, sad stories that show our resilience and tidbits of how we’ve had to change to accommodate a new normal in our lives.  By sharing, we can connect with others so that they can see that they are not alone in their strife.  Bonding together we can hold hands and move forward towards the light.

But to keep our stories hidden is an option that some of us choose.  We do this for many reasons.  We hide our strife, our shame, our sadness and put on brave faces to the masses.  We don’t choose to open up and be seen as vulnerable for fear of repercussions.  It’s hard to hold it all within ourselves but over time, the pain becomes familiar like putting on a pair of jeans that may not be flattering, but they are comfy because we have worn them so many times.

Making the choice to open up and to tell our stories can be agonizing.  Crossing that bridge of fear causes many to never open up and thus find a way to heal the stories in our heads.  It takes bravery to be vulnerable for there is strength in speaking your truth without shame.  To share is to run a risk that many don’t choose to take and I understand that feeling.

One must be choosy when we bare our stories for there are those who do not care to understand.  I get it.  But here, I want you to know that I welcome your stories.  I welcome your sharing and I will hold your hand and heart gently as you write.  You are safe and protected here.  Tell your story.  Gently take off the bandage and let’s clean the wound so that you can finally heal.  Open your heartlight and be free!  There is love her for you. 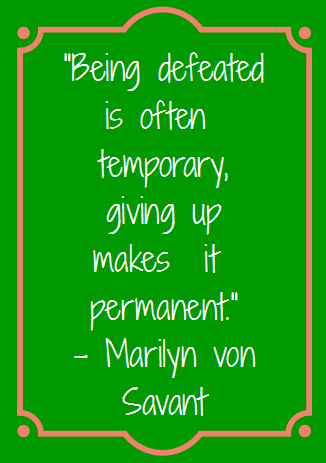 “Being defeated is often temporary,

giving up makes it permanent.”

I have had many challenges in my life as have we all.  Few of us here on Earth have remained unscathed by disappointments and moments of feeling defeated in one way or another.  So it comes as no surprise that we need to find a way through the sadness and often raw painful feelings of defeat.  Sometimes, try as we might to not quit, situations are out of our control and we are powerless to stop the journey.  It is then, at that precise moment, when we need to decide our fate.  It is in our hands, this is our life and we ultimately remain in control.  It remains our choice in how we deal with whatever ‘it’ is in our lives that is not working as we wish.

But to give up, to quit, to not work at what ‘it’ is to improve the situation, that makes it permanent.  I am not a quitter.  No matter what life has thrown at me, I have gotten up and gone on, many times taking baby steps in the process for I had no other way.  But it is innate in me ~ to see the sunshine through the rain and to look for the rainbow through the clouds.  I know not where my strength comes from, but it is within me ~ as real as my eyes are blue.  I cannot be anyone but me and you cannot be anyone but you.

Sure we can change when ‘it’ arrives whether stealthily on little cat feet or as thunderously striking lightning.  It is a choice to fall to pieces and pick them up or to remain broken permanently in defeat.  What I have learned is this is YOUR LIFE to choose as you wish and you must continue to change and evolve as life goes on.  We grow through our defeats, we gain perspective, strength and peace by enduring ‘it’ and I believe that is the journey of life.

Continuing on with peace, love and happiness in our hearts not only heals ourselves, but others as well.  It does not serve us to remain angry and resentful when we endure ‘it’ and remain defeated.  It locks up the heart and soul which simply want to shine.  I know it is hard when we feel defeated.  Many times, through breast cancer, through relationships and through disappointments and family troubles, I have know defeat.  But I know that this too shall pass.  Life will go on and I plan on being there every baby step of the way.

So if you are feeling defeated, take a moment to assess ‘it’ and find the gift in the defeat.  Growth, strength and love come from ‘it’ and you will find that what you endure now will give you gifts you couldn’t possibly imagine in the future.  Let’s connect, hearts and hands as we baby step on this path ~ hold each other up with respectful kindness and loving hearts.

Love is an ability that needs practice.  Self-love is the key and you hold that special key right now.  Isn’t it time to unlock your heart and soul and live again? 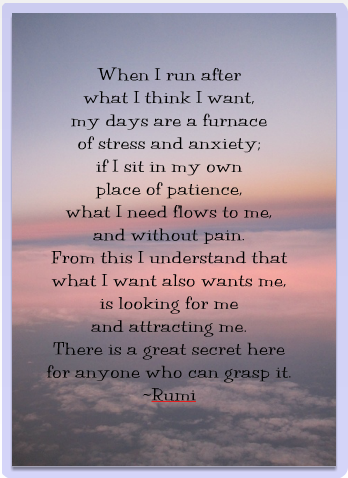 When I run after what I think I want,
my days are a furnace of stress and anxiety;
if I sit in my own place of patience,
what I need flows to me, and without pain.
From this I understand that what I want also wants me,
is looking for me and attracting me.
There is a great secret here for anyone who can grasp it.
~Rumi

So, with that information, my plan this week is to ‘sit in my own place of patience’ and allow the flow of goodness to come to me, be attracted to me and to envelope me with its stillness and wisdom.  Opportunities flow for us all.  Let us…